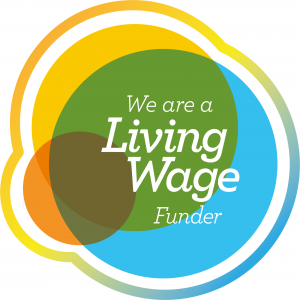 As part of our commitment to being a Living Wage Funder, Community Foundation Wales supports successful applicant charities to pay the Living Wage to any grant-funded staff posts.

Living Wage Funders themselves are Living Wage Employers and then, where possible, also encourage grantees to become accredited employers over time.

Living Wage Funders work together to end low pay in the voluntary and community sector.

Thousands of charities and funders have already embraced the real Living Wage across the UK, but low pay remains a significant challenge across the sector. The Living Wage Funder scheme has been funded by People’s Health Trust and developed in collaboration with a range of funders including Trust for London, Barrow Cadbury, the Joseph Rowntree Foundation and Comic Relief.
The minimum wage for those aged 25 and over in the UK is currently £8.72 an hour in the UK, but the Living Wage, a voluntary rate which is set independently and calculated in accordance to the basic cost of living in the UK, is considerably higher at £9.30, rising to £10.75 in London.

“We are delighted to recognise Community Foundation Wales as a Living Wage Funder. The leadership shown demonstrates a commitment to tackling the serious problems that low pay brings to our communities.

“Many organisations in the voluntary and community sectors are working hard to tackle social injustice and poverty; it’s only right that those committed to these roles are afforded at least a Living Wage. We hope to see many more funders and corporates follow the lead of Community Foundation Wales and the other Living Wage Funders.

“At a time when half of those in poverty live in a household where someone has a job, the real Living Wage is much needed by families across the UK. The Living Wage is a robust calculation that reflects the real cost of living, rewarding a hard day’s work with a fair day’s pay.”

“We believe it is more important now than ever before that we ensure the organisations we fund are paying the Living Wage to all employees rather than the minimum wage. The Living Wage provides such a boost to the economy we know we will see better health, wellbeing and stronger communities as a result.

“This has driven our decision and we are delighted to announce that we are now signed up to as a Living Wage Funder.”

“People’s Health Trust is pleased to welcome Community Foundation Wales as the latest charitable funder to join the Living Wage Funder network. By becoming part of this rapidly growing scheme, they have demonstrated their commitment, as a funder, to working towards ending low pay in the voluntary and community sector.

“We want to see the Living Wage become the norm, and believe that funding organisations can lead the way in making this happen within the voluntary sector.”

The power of sharing your story

We use cookies on our website to give you the most relevant experience by remembering your preferences and repeat visits. By clicking “Accept All”, you consent to the use of ALL the cookies. However, you may visit "Cookie Settings" to provide a controlled consent.
Cookie SettingsAccept All
Manage consent

This website uses cookies to improve your experience while you navigate through the website. Out of these, the cookies that are categorized as necessary are stored on your browser as they are essential for the working of basic functionalities of the website. We also use third-party cookies that help us analyze and understand how you use this website. These cookies will be stored in your browser only with your consent. You also have the option to opt-out of these cookies. But opting out of some of these cookies may affect your browsing experience.
Necessary Always Enabled
Necessary cookies are absolutely essential for the website to function properly. These cookies ensure basic functionalities and security features of the website, anonymously.
Functional
Functional cookies help to perform certain functionalities like sharing the content of the website on social media platforms, collect feedbacks, and other third-party features.
Performance
Performance cookies are used to understand and analyze the key performance indexes of the website which helps in delivering a better user experience for the visitors.
Analytics
Analytical cookies are used to understand how visitors interact with the website. These cookies help provide information on metrics the number of visitors, bounce rate, traffic source, etc.
Advertisement
Advertisement cookies are used to provide visitors with relevant ads and marketing campaigns. These cookies track visitors across websites and collect information to provide customized ads.
Others
Other uncategorized cookies are those that are being analyzed and have not been classified into a category as yet.
SAVE & ACCEPT