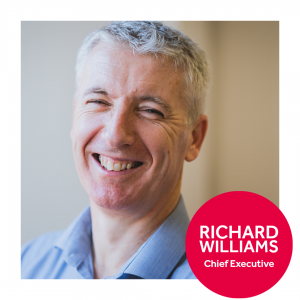 That ear worm was ringing in my head this morning as I digested a new report which looks at how funders work together (or not) and the implications for their local community.

The Strength of Weak Ties report is the work of Tony Chapman, director of policy and practice at St Chad’s College, Durham University. Sourced from the North East of England, much of the report strikes me as being relevant to Wales.

One of its lead findings is that trusts and foundations should work in a ‘neighbourly’ way rather than through formal, integrated strategies.

The headlines in the trade press read that charitable foundations ‘cherish their autonomy’ but don’t make choices in isolation. The report is based on a study of 25 national and regional trusts and foundations.

In my language, that says funders work well together but sometimes their independence is an important strength.

What does that mean for us in Wales?

It’s well documented that our sector here in Wales relies on a small number of national charitable funders and philanthropists, and an equally small number of UK funders who are engaging at scale in Wales.

For me the report affirms that the Wales Funders Forum, capably led by Carol Mack, has a critically important role in bringing funders together. It helps us to connect and provides a space to share.

The findings also made me reflect on the importance of our Trust and Foundations Project, established to improve Wales’ ability to attract UK trust and foundation investment. Whilst led by Community Foundation Wales this is a partnership bringing together funders in Wales and London, together with government and the third sector infrastructure organisations. Each has a strong role to play but we all can achieve our independent aims more successfully by working in partnership.

Wales, probably more than any other part of these isles, needs this approach.

Particularly given the reference yesterday to research showing that 32% of voluntary organisations believe that grant income from foundations will increase in the next two years.

We often forget that whilst we are trying to improve Wales and our ability to attract investment, so is every other area of the UK. We need to get ourselves up to speed and we need to do it faster than other areas of the UK, to address the economic imbalance that we see around us.

The heat is about to rise further, competition will be fiercer – we are going to need our neighbours and friends more than ever.

You can read the report here.

The power of sharing your story

We use cookies on our website to give you the most relevant experience by remembering your preferences and repeat visits. By clicking “Accept All”, you consent to the use of ALL the cookies. However, you may visit "Cookie Settings" to provide a controlled consent.
Cookie SettingsAccept All
Manage consent

This website uses cookies to improve your experience while you navigate through the website. Out of these, the cookies that are categorized as necessary are stored on your browser as they are essential for the working of basic functionalities of the website. We also use third-party cookies that help us analyze and understand how you use this website. These cookies will be stored in your browser only with your consent. You also have the option to opt-out of these cookies. But opting out of some of these cookies may affect your browsing experience.
Necessary Always Enabled
Necessary cookies are absolutely essential for the website to function properly. These cookies ensure basic functionalities and security features of the website, anonymously.
Functional
Functional cookies help to perform certain functionalities like sharing the content of the website on social media platforms, collect feedbacks, and other third-party features.
Performance
Performance cookies are used to understand and analyze the key performance indexes of the website which helps in delivering a better user experience for the visitors.
Analytics
Analytical cookies are used to understand how visitors interact with the website. These cookies help provide information on metrics the number of visitors, bounce rate, traffic source, etc.
Advertisement
Advertisement cookies are used to provide visitors with relevant ads and marketing campaigns. These cookies track visitors across websites and collect information to provide customized ads.
Others
Other uncategorized cookies are those that are being analyzed and have not been classified into a category as yet.
SAVE & ACCEPT